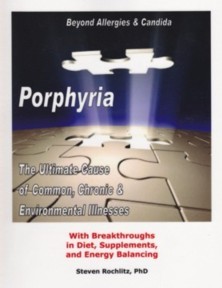 The Ultimate Cause of Common, Chronic & Environmental..

Steve Rochlitz has been a researcher and pioneer in the Kinesiology field for over 30 years. This book is essentially a culmination of his life’s work in holistic health and for him represents the last pieces of the puzzle that is chronic & environmental illnesses.

According to the author: This hidden problem (Porphyria) is often “the final piece of the puzzle” for many chronic illnesses, and/or environmental illnesses. Porphyria is NOT a “rare disease,” rather 20% of Mankind has a porphyria genetic defect that shows itself after stress, toxicity, drugs, or microorganism—Candida, parasites, viruses—overgrowth. Once the porphyria is active, people then become chronically ill, or very “allergic.” Until this crucial book, both patients and practitioners have not known what is really going on, for much illness & allergies! This is the first and only holistic/integrative book published on porphyria.
Large Format Paperback

See also:
Crucial Updates to Porphyria:
Updates to above Porphyria Book - Mast Cell Disease & more. Latest discoveries and thinking. Also for the most difficult cases and more help for MCS, Fybromylgia, Food Sensitivities etc. A must have follow up to the above Porphyria text.

Steve Rochlitz from 'Well At Last' has been a prolific researcher & developer since the 1980’s. Many Kinesiology techniques have been founded or further developed by his discoveries and creations. This includes Brain Integration, Heart Integration, the Candida Balance, Amino Acid Test points and important research in the fields of Food & Chemical sensitivities, EMF sensitivity, Chronic Fatigue Syndrome, Fibromyalgia, Hiatal Hernia Syndrome, Porphyria and more. Your Child’s Body has the Answer Tapping the Healer Within