Causes include diverticulitis (where the pockets allow the build-up of bacteria), scarring from abdominal surgery (interfering with the proper movement of food and bacteria through the small intestine), Crohn’s disease, scleroderma and diabetes mellitus.

Symptoms include flatulence, diarrhoea, constipation and abdominal bloating and abdominal pain. May experience body aches and/or fatigue. If the condition is severe or long-lasting, it may interferes with the proper absorption of vitamins and minerals. Weight loss may also be a problem.

This kit has been put together based on the research and clinical practice of Doctors Michael and Noah Lebowitz.

All the vials (except for the mixed vial) are available in Bacteria Kit 1 and Bacteria Kit 2. They have been brought together into this kit for convenience for practitioners working in this field.

Involved in 90% of anaerobic peritoneal infections of the abdominal cavity.

Diarrhoea, colitis, peritonitis. Often a problem after normal gut flora is eradicated by the use of antibiotics; infection often occurs in hospital and in nursing homes; some adults have low numbers of the bacteria without any symptoms; common in the intestine of babies and infants, but does not cause disease because its toxins do not damage their immature intestinal cells.

Pneumonia. Widely distributed in the environment and frequently occurs in the intestines of humans and many domestic and feral animals.

Can cause life-threatening infections in humans, especially in the hospital environment. Frequently found in root canal-treated teeth. Can cause endocarditis and bacteremia, urinary tract infections, meningitis, and other infections. Among the main constituents of some probiotic food supplements.

Can be commensal in the human intestine, but it may also be pathogenic, causing diseases such as neonatal meningitis.

Often found in the throat and on the skin. Illnesses include strep throat and occasionally invasive GAS disease. People may be carriers and experience no health problems themselves.

In new-borns most commonly causes sepsis (infection of the blood), pneumonia and sometimes meningitis. In adults causes bloodstream infections, pneumonia, skin and soft tissue infections, and bone and joint infections.

Found commonly as a contaminant in milk and dairy products; a common cause of souring and coagulation of milk; some strains produce nisin, a powerful antibiotic that inhibits growth of many other gram-positive organisms.

Part of the normal mammal flora; found in mouth, throat, and nasopharynx. Can cause endocarditis.

The principal commensal bacterium of the oral cavity and a normal inhabitant of the upper respiratory tract. The first bacterium that colonises dental plaque, creating favourable conditions for other bacteria.

One vial containing all of the above. More information can be found here: http://www.webmd.boots.com/digestive-disorders/small-intestinal-bacteria-sibo 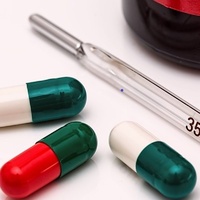